Elder Newton loves the cherry blossoms in Korea. Keep scrolling for a story and some guest photos. 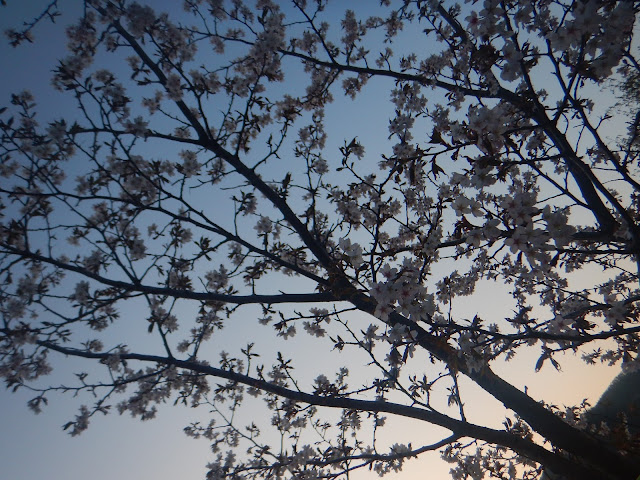 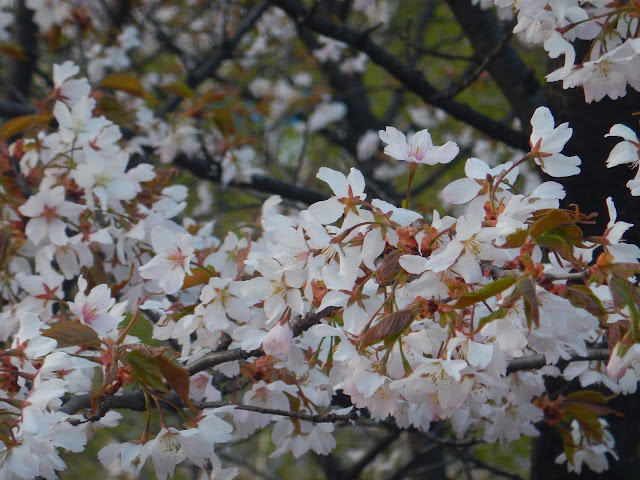 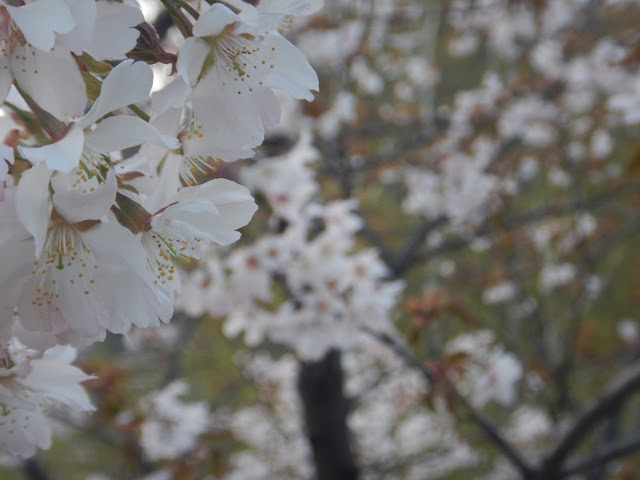 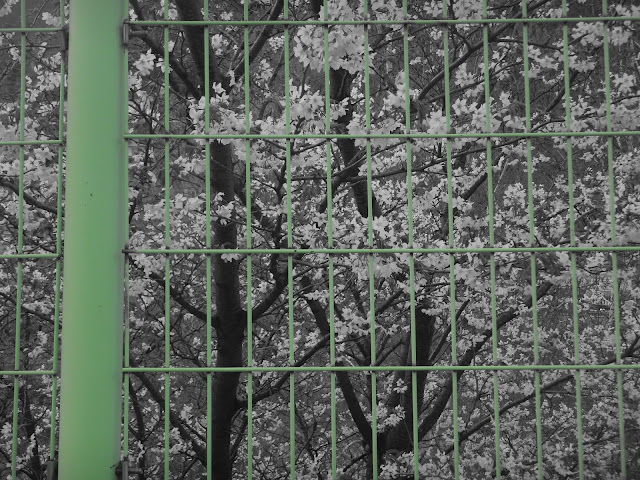 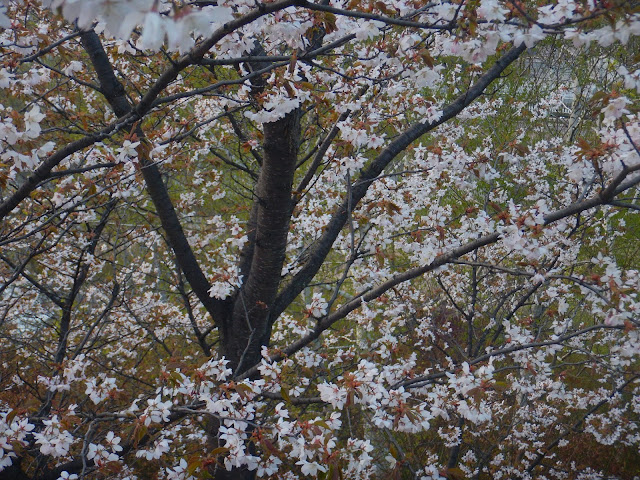 ​So there's a sister who was less active in Wonju who's planning on moving to Taebaek this summer. Since her house will be closer to the church and her schedule clearer, the sisters referred her to us. We've been texting, and on Wednesday when we were on the way back home from Donghae, she texted us and asked if we could meet since she was visiting Taebaek. We couldn't, but she sent us these pictures. She really liked the trees for some reason. She's so sweet.

But anyway, we get home and after a dinner of our favorite bean sprout soup place we hopped on a bus out somewhere when lo and behold we get another text from her. Elder O'Brien has the phone, so he looks first and is a little confused so he has me read it, and it says that she's on the same bus as us. So we got to say hi, and even got off at the same spot. It was pretty cool
Best Wishes,
Elder Newton 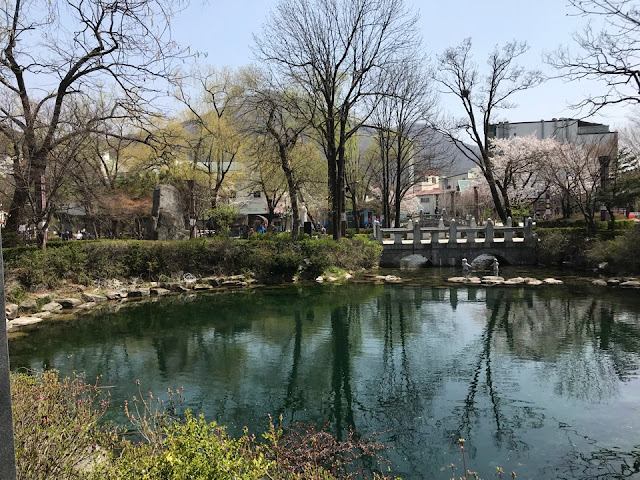 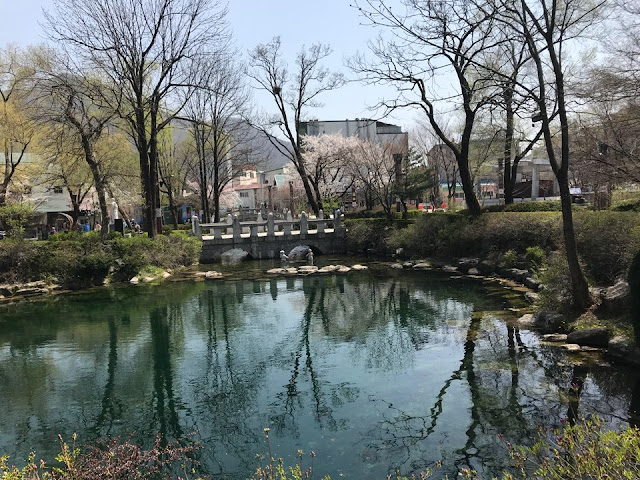 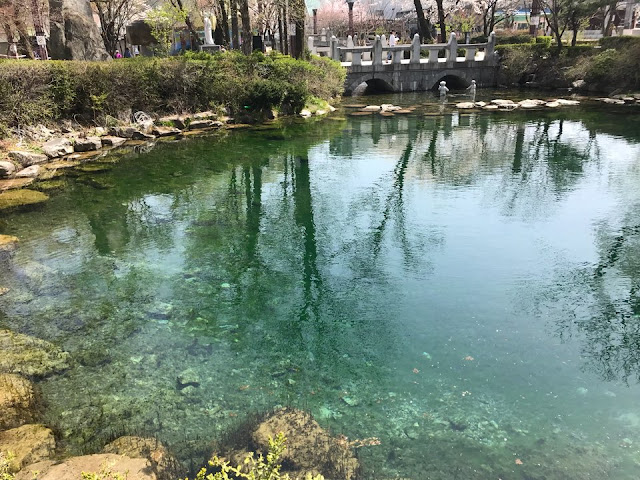 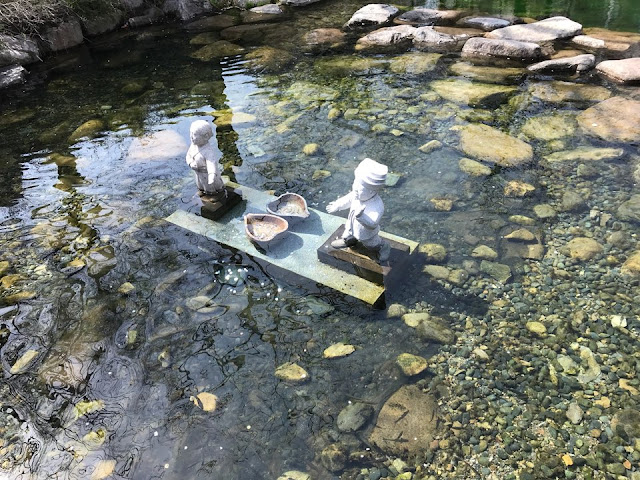 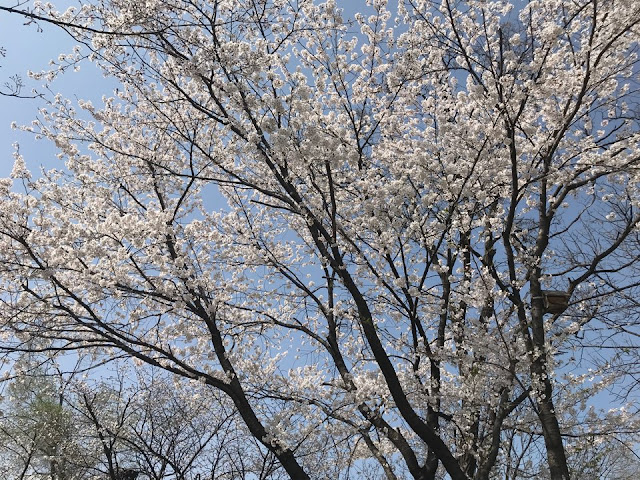 Posted by Cathy Newton at 11:55 AM No comments:

Posted by Cathy Newton at 11:23 AM No comments:

Trench and Tarp
Many hands but light work
Stop the Problem
How?
Steal the Kimchi
The proof is sudden
Farm

Well a lot went down this week, but it all just goes down to Sunday, doesn't it? Every Sunday is an adventure out here. It gets to be a lot though, so playing on one of Elder Wirthlin's talks, I've taken up the saying, "Sunday will end." No matter how much we have to stretch and bend to put church together, it'll end.

This week was going pretty smoothly though. We had gone to Gangneung for President Interviews and I had like a 30-minute conversation with President Sonksen. I only got to see Sister Sonksen for 15 minutes though, because we needed to run to get a taxi to get a bus for English class.

That was also fun because only the branch president came. It was a great class though. For the message we practiced inviting him to be baptized and he really liked it. It even led to a discussion about helping his friends start to meet with the missionaries. That was a good night.

But I got sidetracked. Going on with the week, we also went to 동해 again. There were sick treats made by Sister Sonksen for district meeting. We ate well and had some good training.

And then we skip right on over to Saturday. We farmed the morning away at the branch president's house. He wasn't there, though, he was out in 일산 for a mission reunion. His wife's dad was there though. Father-in-law. Wow, a word in English. Amazing.

So yeah, none of the people we worked with were members of the church, and they had a lot of questions about what we did. They also invited us back to help later, so Operation: Farm Conversion seems to be running smoothly.

After that we changed, cleaned the church, met someone who might be in a gang, ran into some construction workers doing stuff by the church, and did those regular Saturday things. (

The day we get ready for Sunday

) We even made some time to tract that night, but that was also when Sunday fell apart.

We had just started when we got a text from the branch president saying that due to the aforementioned mission reunion going long he had missed the last bus to Taebaek, so his family would attend church with their oldest daughter in her ward. (By the way, she's amazing. She's in high school, but has lived alone in another part of Korea for like a few years.) Thus half the branch, the main talk and the Gospel Doctrine teacher were gone for Sunday.

I then spent the rest of the night worrying about how to do all the things. Transfer calls came and went; meanwhile I wrote a talk, freaked out and called all the members about getting our Young Man a ride to church and how none of the missionaries left. But we get one more elder. There's always a lot of branch business.

I did eventually get to bed and soon enough it was the next morning. I got up, hopped in the shower and realized I was the presiding authority at church that day. It was weird. In the end we had seven people total at church. Our Young Man, our Old Man, and three sisters. They're the best, dangit. So faithful. The church meeting itself went smoothly enough. I don't know how I was able to talk for 20 minutes about the priesthood without rambling really. The other two talks were really good though. Brother Go (he wasn't with his family in Seoul, thank goodness) just touched my heart. He is the best Teacher in the whole church. His birthday is Saturday though, so soon he'll be the best Priest.
After sacrament meeting we just set up the TV and watched "Joseph Smith: Prophet of the Restoration." The members really liked it, and they shared some really nice testimonies at the end of it. Afterward we had lunch together (except for Brother Go; he had to leave fast to study. The sisters made sure he had some food though. They're so nice). It felt like a family meal. It was about the same size and everything.

But I've gone on long enough. Nothing much really happened after that anyway. We just talked for a long time and the sisters asked what kind of a wife I wanted. I went with "faithful." Then we took some photos, did the clerk stuff, rearranged the talk schedule for the third time I swear, and had a quick dinner before knocking some doors. So yeah, Sunday did end. Good stuff. Or Dark Stuff, huh. Oh well. Have a good week!

Elder Newton
Posted by Cathy Newton at 11:06 AM No comments: 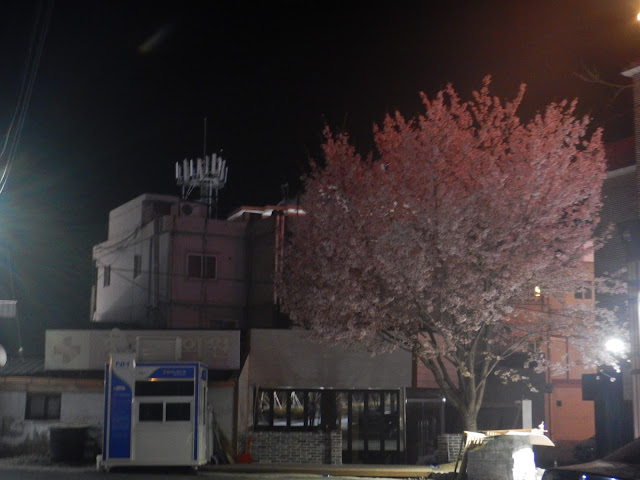 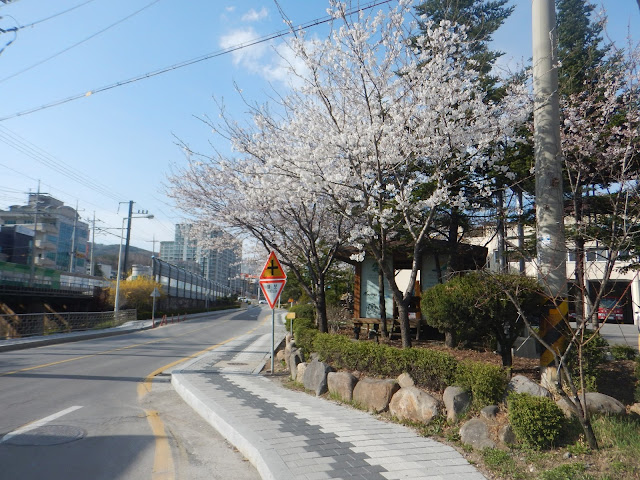 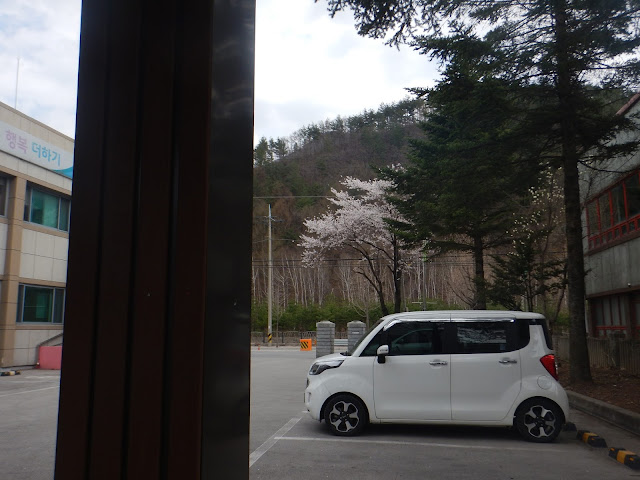 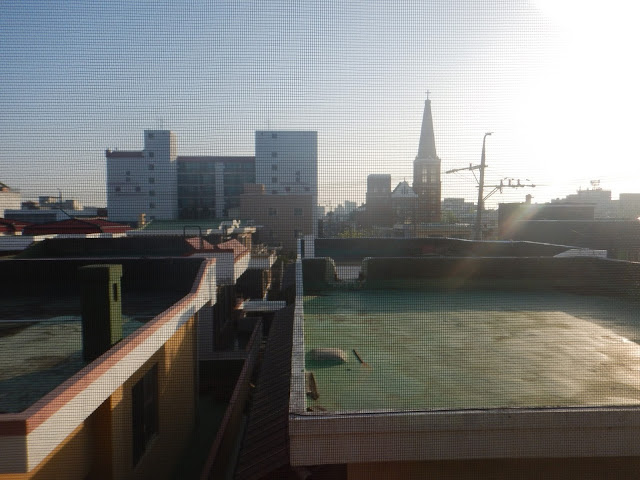 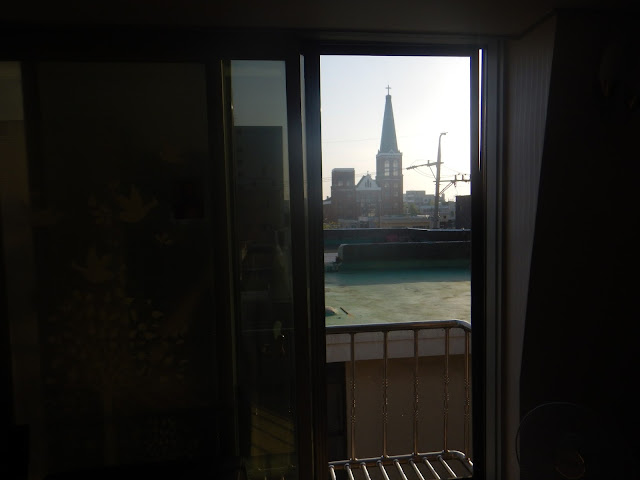 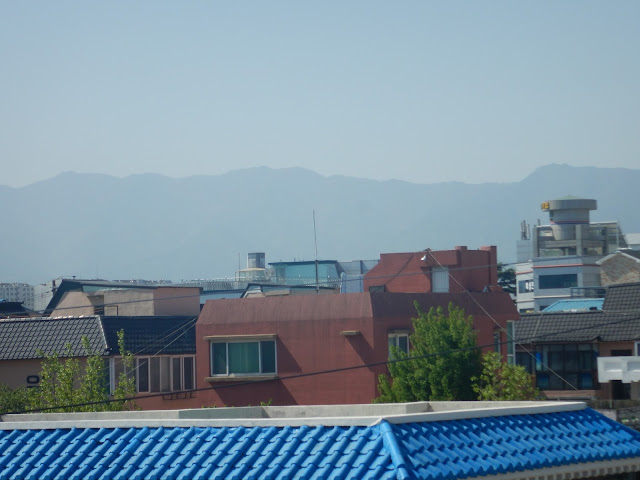 Posted by Cathy Newton at 4:06 PM No comments:

Week 92: Three Areas in One Week

Curve and Crest
Winding paths but straight lines
Stop the Problem
How?
Sever the Line
The proof is defenestration
Road

We started off the week by sending the sisters off and heading to DongHae for district meeting. It was my last chapel of the district, so I felt very accomplished. We had pizza with my Son and Elder Steward. (Sadly, neither are pictured. We'll do better for next week.) It's really green out on the coast. But Taebaek still has cherry blossoms because we're chill. 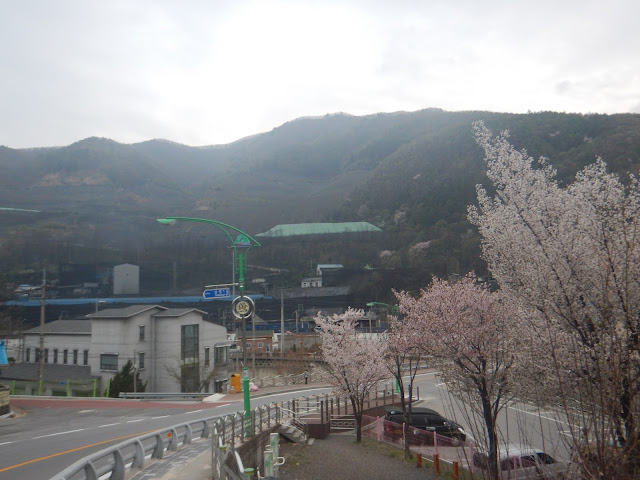 Then we had a quick one-day break and sent me off to Gangneung for exchanges. It was a good time. I met my old English class at the college, and then studied syntax with Joon and tried to write my talk for Sunday. That was fun. We also had pizza with all the young adults in the 강릉 branch. It was a good time with a lot of half word. Well, they said it. The missionaries were all 요ing it up.
I also may or may not have bought ₩4,000 worth of ice cream in really small amounts of change because ice cream bars are really cheap out there. Good stuff.
Well that's the three areas really. So we made the whole email! Yayyyyyyy O guess we have time for something else.

Oh yeah, now that there's just the two of us, the number of things we have to do for sacrament meeting has gone way up. Elder O'Brien is relearning the piano, I conduct, break the bread for the sacrament while he plays the hymn, and this week I even had a 25-minute talk. It would have been shorter, but a member forgot to come to church (it's OK though, we love him) and the only other speaker was our Primary child. We lucked out that he spoke for an entire 5 minutes.

But yeah, the topic was the Book of Mormon, so in a stroke of laziness and genius I decided that during the week instead of working on my talk, I'd devote personal study to finishing the Book of Mormon. So I've finished it yet again. I just spoke on what I learned in this most recent reading and added a few stories for time. It worked out really well actually, because I may or may not have been finishing it up right before church.

Maybe I'll send a copy home, but it's all in Korean. I didn't really have time for an English draft for this one. Whoops. Just know I gave Mom a shout-out for Harry Potter Time. That should be sufficient.

Week 91 bonus photos: A Sunday Evening of Tracting in the Cherry Blossom Wilderness 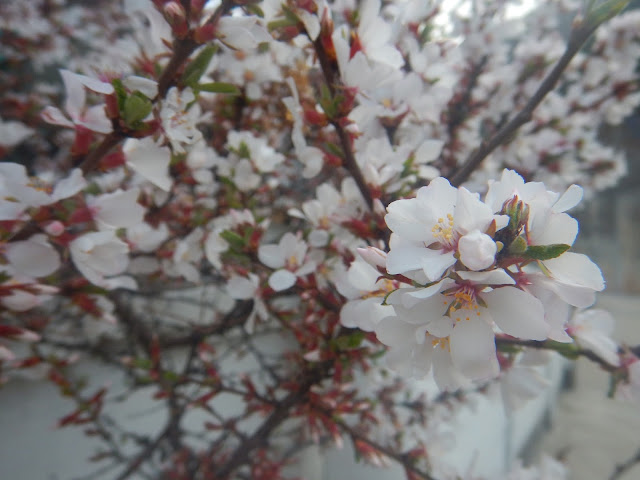 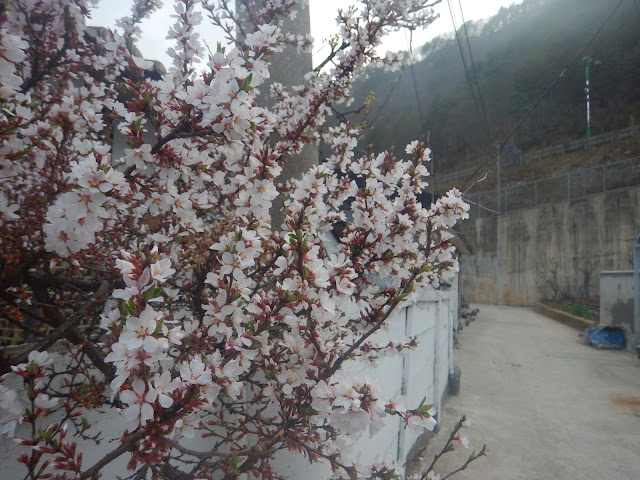 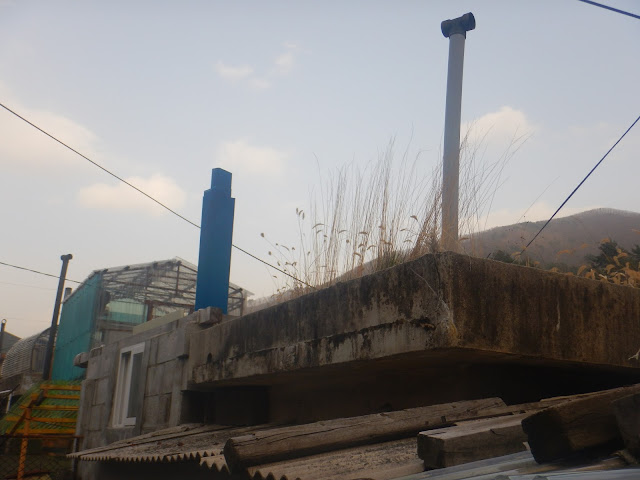 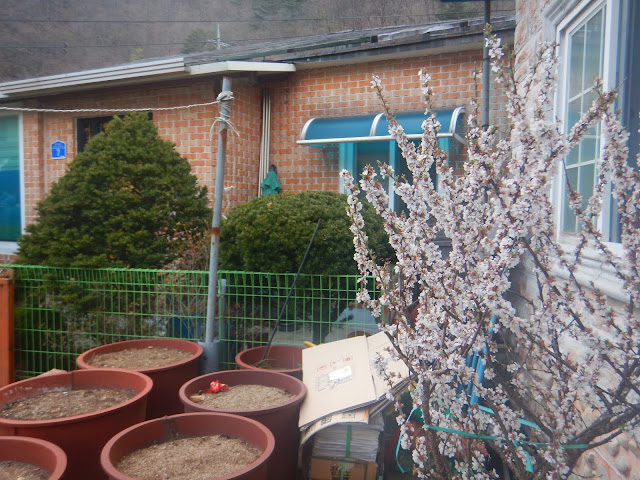 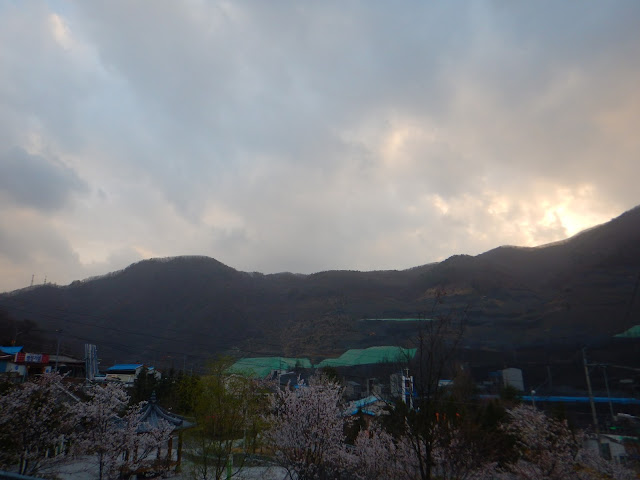 Posted by Cathy Newton at 8:57 AM No comments:

Week 91: And Then There Were Two

Discover 쌀국수
Cramped but Quaint
Chill Rain but Warm Restaurant
Stop the Problem
How?
Clear up the Misunderstanding
The proof is Pizza
쌀국수

Well, we've had an exciting week. We've bought Elder O'Brien glasses and sent a package to his home. Both of which got us some cool potential investigators, or at least nice friends in the post office and glasses store. If we keep this up, we'll know all the shop owners in 태백


We also had to go to Seoul though. It was the worst except for the bus ride going through the one corner of Wonju's area I never really went to. That was great. We also showed up to Seoul about the same time as our zone leaders, so we got dinner together at a really quaint Thai restaurant. Good memes and special made vegan food were had.

Also President Sonksen has the best house. We got to stay in the General Authority room, and I think I had the best shower since my last trip to a 목욕탕

As for our mission conference, it was a good time to see old missionary friends, watch some Netflix, and get some Korean cultural appreciation. Y'all should really watch "Korea From the Air" or whatever it is we watched. It persuaded me to move here forever.

As for the rest of our lives though, it was pretty normal once we got back to Taebaek. We saw some nice people and did service. Started the farm at the church. Also we made a new friend from the phone. They live in Gangnam now, but they like to call us for English questions. They're really good at English though, so the questions are like, "What's the difference between 'get,' 'make' and 'have'?"

Sunday was good. A 녹번 member who served here randomly showed up. He's really cool. He had pictures from when the branch president's daughter got baptized.

But our sisters have been sent off to Seoul, so now it's just me and Elder O'Brien in charge of this vast expanse of Korean countryside. Also five meetings at church every week. And we lost our piano players. So Elder O'Brien needs to relearn hymns again. I don't know how the sacrament will work, but we'll figure it out.

On the bright side, we've combined districts with 동해 so I will finally be able to go to that church. My son is there right now too, so it's all a party.

That's all the time we have for today though, folks. Hope you're all doing well!
Best Wishes,

Elder Newton
Posted by Cathy Newton at 8:27 AM No comments: