Week 18: Thanksgiving and Christmas and singing 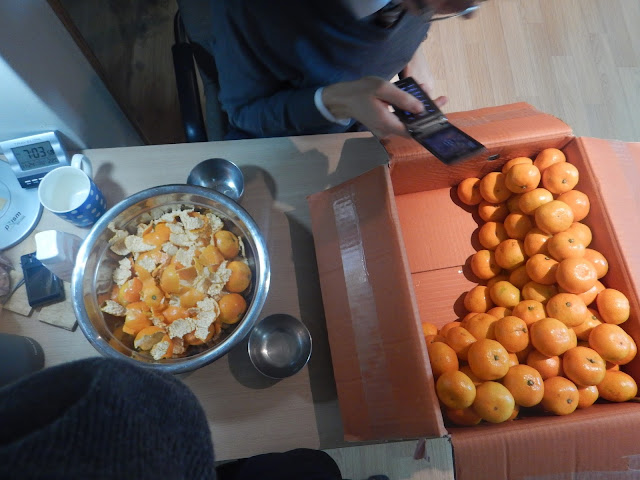 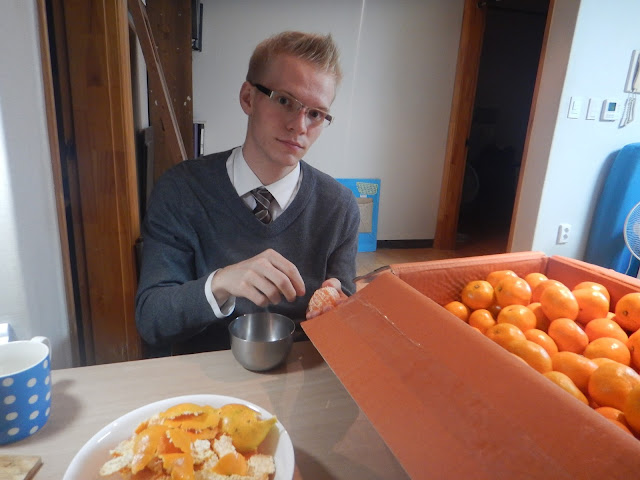 Peel and Squirt
Many appellations but one fruit
Stop the problem
How?
Man the Oars
The proof is sight singing
Citrus Reticulata
So Thanksgiving was this week. It's not a holiday here in Korea, so we spent quite a bit of it on Christmas prep, but for dinner we had our 10kg boz of 귤 (gyoor). It was amazing, and also we only maybe got through 2kg. But it's k. I've basically been living off of 귤 all week. We have so many. It's great.

But back to Christmas.

Have y'all seen the new video the church put out? It's so sick.* Watch it. I love it. Just do the service advent calendar. Like it's such a good video we figured out how to reformat it and put it on our flip phones. Well, we're working on it. I don't think our phones were meant to have videos that good play on them. But we are using them to their full technological capacity. They even have bluetooth.

By the way, we had a stake choir competition on Saturday. I haven't mentioned it here, because Elder Brown and I never could make choir practice, so we thought we wouldn't have to sing. Well … we were wrong.

See, we were trying to teach a lesson to this real cool kid, when the second counselor in the bishopric came in and basically said, "Oh hi investigator, nice to meet you. We need to borrow these guys to sing for a bit. Come watch!" Then we went and sang. It was fun. We also got to watch the sisters' violin/piano duets. One was "Where Can I Turn for Peace" and the other was a "Pirates of the Caribbean" medley. They had to arrange the latter one from the violin 1 and 2 parts that were written in different keys. It was pretty great. They were at the church all week practicing. I even helped them with some of the transitions in the piece because they had to cut it down. It was great.

Anyway, love y'all! Watch the Light the World stuff!

Elder Newton
* Pretty sure Elder Newton is using this word the way the young people do nowadays.
Posted by Cathy Newton at 10:34 PM No comments:

Another letter from Elder Newton arrived on Monday. He thought his loyal readers might want to know more about his trainer, Elder Brown.

So my life with Elder Brown starts Day 1 in country. I hadn't met him yet, and had put very little thought into my new companion. All I'd done to this point was get off the plane, 전도 (jundo) (proselyte) on the subway, and ride a taxi to President's house (President Sonksen, but his house is actually close to the Blue House). I was filling out a get-to-know-you paper as I was getting to know the APs,* and offhand Elder 남 (Nam) said, "You know, I think you and Elder Brown would be good together."
The conversation went on; I think Elder Littlefield said something like, "It's just because they're both blond, isn't it?" But I'm not sure. In any case, that night in my nightly prayer I asked for Elder Brown to be my trainer. It was kind of a joke with God, but I guess my prayer was answered anyway, because the next day of training I was sorted into 녹번 house w/ Elder Brown as my companion.
Elder Brown is a very nice guy. He serves everyone. Me, the district, the ward, people on the street, etc. He's very helpful. He's been out a year and a half, been in 녹번 4 1/2 months now, and has been district leader enough on his mission that he's led more district meetings than he's just attended.
And yeah. Um, he's from Missouri. His family has nine people (mom, dad, two older sisters, one older brother, (him), and three younger sisters. He did soccer and tennis, played the tuba too, loves math and science, and wants to be an aerospace engineer. He's also pretty funny, but in a "he makes good jokes" kind of way, not like a me kind of way. (If you're curious, that way is "not funny, but says things in a way people laugh out of pity.") Elder Brown is also a decent cooking man, and is very patient with Elder Newton. He compliments my Korean less than other people, but I like that, because I definitely have things to learn and no reason to be cocky. Plus when he does compliment me, it's pretty nice, and he has advice on how to improve.

* Assistants to the [Mission] President
Posted by Cathy Newton at 8:39 AM No comments:

Week 17: Kimchi and exchanges and stuff

Lift and splat
Long activity but not really any news about it*
Stop the problem
How?
Write everything you'll say about Kimchi in the Discover poem
The proof is pixels
Kimchi

So it's been a pretty busy week. Last Pday we mostly spent teaching. It was pretty fun, but also shopping was hecka rushed.

Speaking of last week. I have to give a quick shoutout to Elder Brown, because if he wasn't there, y'all would have no pictures of me. He always was saying, "No, they want pictures of you, not that mailbox." It was fun.

Ummmm, this week in English class I performed "Hamlet." Well. just the soliloquy. But still. We were just doing a show and tell, and when I gave them the option of "Canterbury" or "Hamlet," they chose "Hamlet." It went pretty well. I got a choco pie for it.

Oh, also we had a cool talk from this guy, PJ Rogers, on Wednesday. He had a lot of great advice and was also really funny. Look him up sometime, he had like a radio show in Korea and also got his bachelor's or something† entirely in Korean. He went to like one of the best schools here. So yeah, cool guy.

And I don't really have any other memes, sorry. Christmas is fast approaching as a missionary in a country where there's no Thanksgiving, but I'll wait until next week to tell y'all about that. Have a fun Thanksgiving! Elder Brown and I are planning on eating a whole box of mandarin oranges to celebrate. It'll be a blast. See y'all next week!

Elder Newton
* Elder Newton and his zone made and packaged kimchi for elderly and needy people in cooperation with the Korean Red Cross on Tuesday.
† Actually it was an MBA.
Posted by Cathy Newton at 9:11 PM No comments:

Have you been wondering about Elder Newton's living conditions? Wonder no more. Here are a couple of photos of the apartment he shares with Elder Brown, Elder Gildea and their greenie (whose name Elder Newton did not provide).

The many, many photos of week 16


SUNDAY
I was bad at pictures, so instead of church, you get mailboxes I saw during the day.

Posted by Cathy Newton at 9:56 PM No comments:

Discover far too many emails from one missionary

Open and Read
Few letters but thousands of words
Stop the problem
How?
Look at the pics I finally sent
The proof is Bebero
Far too many emails from one missionary
Note from Mom: A photo post is forthcoming. While you wait for it, do click on the link — it's pretty fun and interesting.
Posted by Cathy Newton at 8:57 PM No comments:

Pluck and crunch
Thin core but thick trunk
Stop the problem
How?
A Children's show about a Cat
The proof is Nova
사과

So transfer calls happened. I'm still in the same place with good ol' Elder Brown. Which is great, I really like it here. Elder Gildea got a new greenie, so he was left without a companion for most of the week. He went to another area for most of the week so he could do zone leader stuff with another soon-to-be trainer. This left Elder Brown and me in a two-man house that I still have yet to send pictures of. And I forgot my camera cord today, but don't worry. I have a plan for next week that will sate the need for pictures I've heard so much about. In the meantime, know my appearance is the same, Korea is beautiful, and it's great.

So yeah, just a quick amusing story I guess.

This week, a few members have mentioned my Newton name, and making Isaac Newton jokes. It's been a blast actually. My favorite was after a lesson with a member, the member called me 사과 장로님 which means: Elder Apple. We had a good laugh. I'm really sorry for how terrible I am with pictures. I will improve.

Also, before I go, quick shoutout to Natalya Johnson for making me a sick watercolor and discover poem. I loved it. If anyone else wants to send me discover poems, I give the Elder Newton Guarantee that you'll receive a letter back with my official review. And my thanks, because I love them. Anywho, until next week!

* "Sagwa" means "apple" in Korean. In Chinese it's more like "melon head." I'm glad Elder Newton is in Korea and not China.
Posted by Cathy Newton at 9:59 PM No comments: