Week 35: I am still out here, and don't know how to write mass emails

Scribble and Scratch
Several ideas, but no alliteration
Stop the problem
How?
Pour the mix
The proof is Gladiator
Blank

So yeah, I am still in Wonju! It's great! We went to zone conference this week, so there was a lot of bus riding. I went through the city where the Olympics will be next year, but I don't have pictures of that part. Sorry. I am trying to improve, but speaking of pictures ...

So yeah, I'm just learning still, and taking sporadic pictures. A lot is the same, including my poor email time management. So we'll be short today, good thing nothing huge happened this week.

Best wishes,
Elder Newton
​
* Elder Newton is on the 18th floor of his building.
Posted by Cathy Newton at 5:37 PM No comments:

Week 34: My mother has questions again, which is good because I never know what to email


Discover Sponge
Squish and Squirt
Clean beginnings, but Bacterial colonies
Stop the problem
How?
Pull the curtain
The proof is moose
Sponge

So is Wonju like West Valley City or is it more urban? Like, it's bigger heightwise, but similar to West Valley I guess?
What is Elder Shumway's first name? I do not know? Maybe Ian? I always call him Elder Shumway
How long has he been in Korea? He's been here about four months now? He was in the MTC with me
Where is he from? Provo but not quite. Salem
Who are the other elders in your flat/house? Elders Diamante and Horne
Is it a flat or house? A flat, no one in Korea has a house
Is it comfortable? Yeah*

And yeah, like I'm here in Wonju. It's a good time so far. It's weird being in a place I've heard so many stories about. I met Elder Brown's Korean grandpa on Sunday. It was fun.

Speaking of church, the branch here is so good. And by the branch I mean the branch president (he's a different man, not Elder Brown's Korean grandpa). Anyway, the point is, he's amazing. When I called him to introduce myself, he asked if I had musical skills and if I could ever do something for the branch. Well, I informed the man I could play clarinet, but Aria was off in Utah, so it would be hard to do anything musical. But everything is OK, because it turns out he loves the clarinet and has two! So now we're gonna do a duet and we practiced yesterday and I was so happy.

And yeah, I have other things people might like me to say, but I'm good for now. See y'all next week!

Elder Newton
* "We have heated floors here. Sometimes we forget to turn them off. It gets real hot then."
Posted by Cathy Newton at 5:35 PM No comments:

Skim and Slam
Short story but lasting impact
Stop the problem
How?
Uproot the mangrove
The proof is collection
Book

Look at the two pictures I took this week!

Anywhoooo, it's been a good time out here in 녹번. It was also my final week and I'm terribly sad. For one I had to talk in church. It was the worst. I haven't had to do that since I first got to country. But it's k, I know like three more Korean things now.

But anyway the point is I'm moving to 원주 and I'm gonna be senior companion and I'm terrified. Like I'm excited because Elder Brown told me so much about Wonju, and it sounds like heaven, but I do not want to be senior companion. It's terrible. You have responsibility. Also like 녹번 was my home. I've lived here for like six months. It was a good time. I know so many random things about the area and our house. It's weird being the oldest somewhere. Like, the other day I heard the other elders complaining the vacuum couldn't change suction. But like, the vacuum does change suction. Like, if I was gone they would have never known. It's a lot of responsibility.

I feel like Icarus or something. I'm this ridiculously unprepared kid standing on the brink of what everyone tells him will be great, but all he's got is some waxed-together feathers and a wooden frame keeping him from dying in the ocean. Like his dad was a genius, but also he still messed it up. It's OK though. Like, maybe Elder Shumway will be more responsible than me.

I don't know what the point of this email was. I'm just a mess. I'll let y'all know how Wonju is later or something.

Elder Newton
Posted by Cathy Newton at 5:14 PM No comments:

Elder Newton mentioned the formidable jenga skills of his companion, Elder Ryu, in an earlier email. Here we see Elder Ryu, as well as Elders Anderson and Speirs, Sisters Ouzounian and Gottfredson, and prospective elder Han, demonstrating their mastery of this game. (Bonus: singing by Elder Newton.)

Posted by Cathy Newton at 5:12 PM No comments:

Dunk and Freeze
Long fill but short ordinance
Stop the Problem
How?
Cut the CCTV
The proof is bowling
Baptism

So yeah, I saw my second baptism in Korea yesterday, and this time it wasn't an 8-year-old member. It was the other team's investigator, but I love him still. He's so pure. He has 100% not sinned yet. His name's Jeff and he is a good man, but yeah, that's really all the news I have.

In other news, I've decided I was sent here exclusively to see the character development of Han Lee. Like, this man is the best person I've ever met. Let's do a flashback because I don't have other news really. Basically I spent my second night in this country consoling a man, or rather watching helplessly as Elder Brown consoled a man, as he cried over his son and all the decisions he was making. The day after that his daughter was baptized, and that was baptism number one.

As the weeks passed I did not have a conversation with 이춘호 where he didn't talk about his son. This continued even past the first week of my second transfer when I finally met our Prodigal Han. He came back from BYU to do his Army service, and was just chilling at home one night when we dropped by. He's really cool, and I kind of just wanted to be his best friend.

Flash forward though 12 weeks of meeting this guy multiple times a week, and watching him slowly let go of his anger and slowly, oh so very slowly, start coming back to the church.

Yesterday was fast and testimony meeting, as we Mormons like to do, and 이춘호 went up to the stand. I then saw him cry for the second time as he bore testimony of the changes his son was making in his life. It was touching. Then right after the block, good ol' Han was called on with no notice to translate our recent convert's testimony.

There has been a lot of growth in the time I've been in 녹번. I've seen in in myself, companions, members, investigators, but I have never seen as much change in a person as I have in Han. I doubt I ever will.

Oh, also Elder Ryu did a "Street Casino" and lost. But I got this pic: 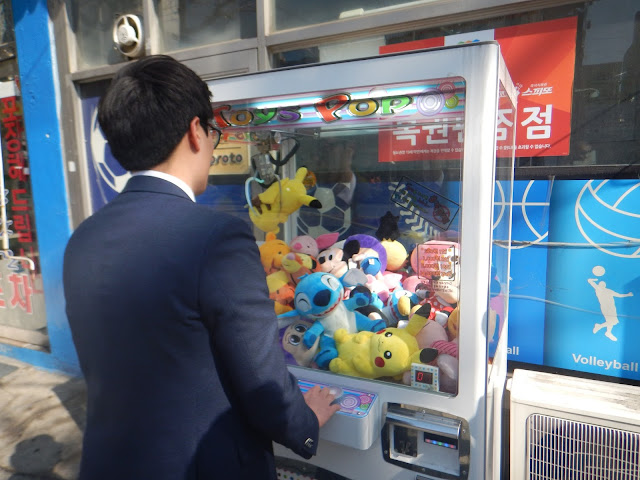 Posted by Cathy Newton at 4:31 PM No comments: